Surviving the heat Here in Phoenix, Arizona our average highs are in the triple digits for 4 months of the year. And they’re over 85 degrees for seven months.

Our summers are less “shorts and t-shirts” and more “fiery armageddon.”

We stay inside at all costs.

If your air conditioning unit dies it can be an emergency situation.

My daughter, however, doesn’t care about the heat. If it’s 107° she wants to play outside just as much as when it’s 74°.

I also enjoy being outdoors, and I chose my house largely for the backyard. I better enjoy it.

It’s only March here, but daily high has been approaching 90 degrees for the last week.

I would condition the outdoor air if I could, but something about the laws of physics tells me that is a fruitless effort. The next best thing I’ve found to make the patio tolerable is a good mister system.

Last summer I roughed in a mister system built out of PVC pipe and some mist nozzles. I hooked it up to the hose to get it up and running. It felt like I had moved somewhere 15 degrees cooler.

However I quickly got frustrated at this solution. Every time I needed the hose for something else, I had to disconnect it from the misters. I also found myself leaving them on overnight a few times. The misters, on the other hand, were working great. I even loved their positioning. A few extra nozzles to expand the system would be great, but most of all I wanted a way to turn it on and off from my phone.

During the fall I completed my irrigation system including a full sprinkler system for the front and back yards, multiple drip irrigation lines, and dedicated lines for my trees. Since there was never going to be a better time, I added one extra valve. My automated mister system was going to become a reality.

The plumbing is easy; the controller can get complicated. Since I built this on regular irrigation valves, a sprinkler controller would be the logical solution. However, if you’ve ever used a sprinkler controller you’ll know their interface is quite possibly the most frustrating and non-intuitive interface known to mankind. I had 11 valves, and it was obvious that this wouldn’t meet my needs for the misters.

Think about how awesome it would be if your sprinkler controller was on your network. And you could see the current status of every valve from anywhere. What about if you had a clean GUI for setting up your sprinkler schedule? 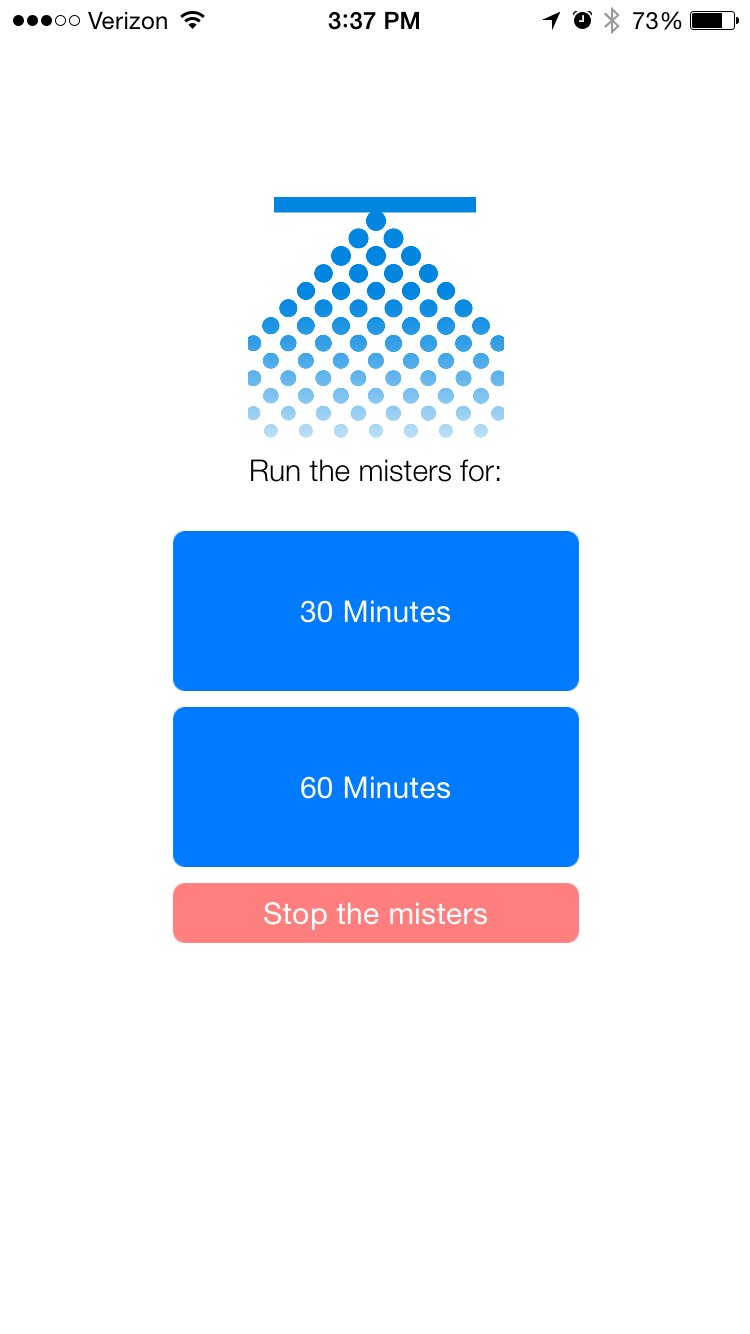 Misters. Sorry, but you won’t find this in the app store.

Since our temperatures are on the rise, I knew it was time to put together “Misters”, a single purpose iPhone app for my backyard mister system.

In less than an hour, I had a fully functional and easy to use interface to control my misters from my phone.

My hose is free to do hose things. Our misters aren’t left running overnight. And nothing is better than sitting on the patio with a nice cold brew and turning on the misters without getting out of the chair.

Even with misters it’s still too hot during the peak heat in in June, July, or August, but the other hot months have no longer taken my patio from me.

In the next few weeks I hope to expand the number of mist nozzles by a factor of 4 and add some better in-line filtering (our water here in Phoenix is pretty… bad).

If I’m really feeling ambitious, I’ll even paint it.